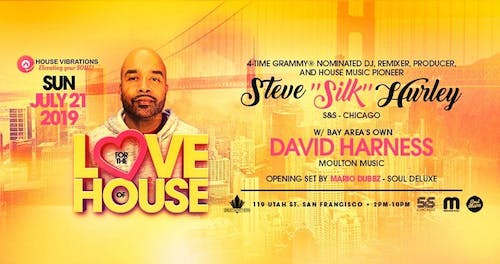 FOR THE LOVE OF HOUSE!

We are pleased to announce: 4-Time GRAMMY® Nominated DJ, Remixer, Producer and House Music Pioneer, Steve "Silk" Hurley Of S&S Records Inc. will be making a very rare appearance in San Francisco to "Jack Your Body" and bring you the evolution of house music. Steve "Silk" Hurley is coming to grace us with his amazing talents of music.

David Harness is one of the most popular DJ/producers in the San Francisco Bay Area club scene. He has been described as ‘a man who lives, breathes and emanates everything that is beautiful about deep house music and classic garage.’ David is considered a ‘rising star’ within the dance community.’ With influences varying from Barry White and the Love Unlimited Orchestra, Harold Melvin and the Blue Notes, Quincy Jones, the Jackson Five, Stevie Wonder, Parliament Funkadelic, the Isley Brothers and First Choice, among others it's easy to see why funk and soul have always been strong elements in his sound. In 1990, David began DJ’ing at the After Dark in his hometown of Monterey, California. As his popularity grew past the boundaries of Monterey, he was invited to establish a residency at Tilt and the Sound Factory in San Francisco.

Opening set by Bay Area's Own:

These 3 Pioneers together we are sure this will be an amazing experience.

Looking forward to seeing everyone on Sunday, July 21.