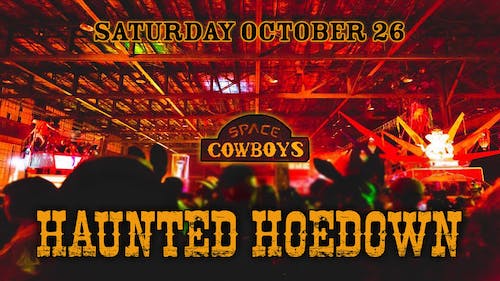 The Space Cowboys’ legendary Halloween Party is back!!!

On October 26th, we’re taking over the inside (and outside!) of The Great Northern to bring you HAUNTED HOEDOWN, a spooktastic adventure in breaks, house, and funk featuring the one-and-only A.Skillz from Fingerlickin' Records!

A.Skillz is a true party rocker behind the turntables, captivating crowds with his ability to embrace all aspects of music that he takes inspiration from and mash them up into a unique cocktail, infused with his own signature flavour of funk. With his DJ bookings taking him to the four corners of the world, he has appeared on stages big and small...and no matter what venue or style, he always brings the house down.

A.Skillz will be joined by your favorite Space Cowboys DJs as well as special guests on three stages at The Great Northern. Art cars, the MOG, silent disco and more. Full line-up coming soon!