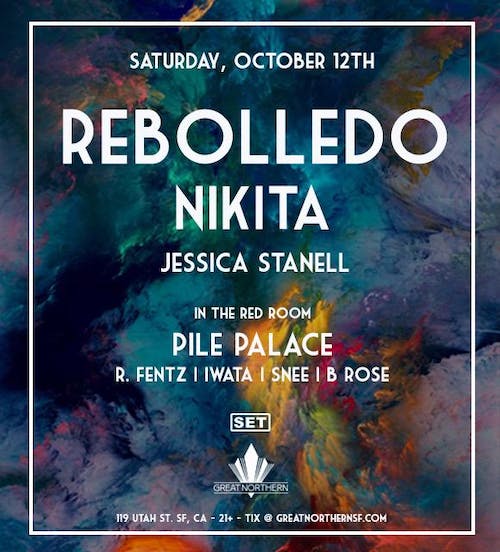 The Great Northern and SET are coming together to bring you a night with a true maven in the underground electronic music scene: the iconic Rebolledo. Direct support by none other than NIKITA.

Pachanga Boys, Hippie Dance, TOPAZdeluxe, M.N. Roy and Mayan Warrior are some of the projects Rebolledo is involved as “Experience Designer” showing his forward thinking vision. Foremost, He believes in music beyond boundaries, collecting material from all corners of the world and showing how you can tell a story with those apparently unconnected records. His sound is propelled forward by psychedelic beats and rippling synthetic basslines that induce trance like states. Whether it’s his solo or collaborative efforts, Rebolledo has always been a maverick presence in underground dance culture.

As a partner of two of the most iconic clubs in Mexico, M.N. Roy in Mexico City, and the now classic TOPAZdeluxe in Monterrey which he founded in 2007, and as a main collaborator of the Mayan Warrior project, he has pushed the music culture beyond his own performances.

In 2015 Rebolledo was included in the FORBES Magazine list of the fifty Mexican creatives with the most worldwide influence. In 2017 his reworks album ´Mondo Re Alterado´ is coming out including collaborations with great artists such as Superpitcher, DJ Tennis, Maceo Plex, Red Axes among others.

NIKITA is a DJ's DJ, a rare soul who truly understands his role in the DJ booth. Performing anywhere from two to twelve hour sets, NIKITA weaves music into fantastic journeys of rhythm and sound. NIKITA's ability to contrast the harder elements of techno with the soulful sensuality of deep house has garnered him accolades from some of the world's best DJs and allowed him the rare opportunity to tag team alongside the likes of Lee Burridge, Cassy and Derek Plaslaiko. Indeed, NIKITA has played with a Who's Who of international talent, including Danny Howells, Steve Lawler, Craig Richards, Steve Bug, Damian Lazurus, M.A.N.D.Y. and many, many more. With additional inspiration coming from friends such as Ms. Honey Dijon, Tedd Patterson and Danny Tenaglia, it comes as no wonder why NIKITA's story is one of a dream come true.