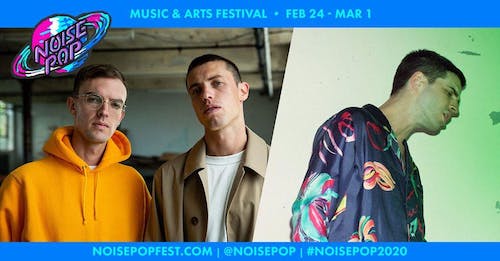 Chaos In The CBD

“Walked on the beach, went to a vineyard for lunch, smoked weed, drank too much and got to play my music all weekend: Etta James, ’80s stuff, Winans Brothers Louie Vega remix, The Orb and John Tejada’s Sweat On The Walls.” Ms Helliker-Hales

When your mum sends you texts like the above it’s perhaps not surprising you find yourself with a musical career. For the Helliker-Hales brothers in Chaos In The CBD, it’s strictly a family thing. They may well be one of the hottest propositions in the current house firmament, but they’ve still managed to maintain the homespun vibe that comes from growing up in the idyllic suburbs of Auckland.

These days the duo – Louis and Ben (aka Beans) – are part of the tight knit Peckham dance community, but the chill summers of New Zealand’s North Island still hold a place in their fertile imagination. Having been schooled in the wares of bands like The Cure and Joy Division from their music-mad parents, it’s now the boys turning them onto house music and, yes, John Tejada.

Having built a reputation in the studio and followed it up with the constant rigours of the DJ touring life, they’re now ready to take stock, step back and examine where they want to be in ten years rather than the afterparty in three hours. They’ve taken the big step from having a laugh to building a career. “Plans?,” queries Louis. “We’ve got our own label and we invest a lot in that. It means we can release stuff at a rate which we want to. We also have a two tracker for Mule Musiq but then going forward, it's kind of open waters, though we do want to start working with outside labels again, it can be a bit of an echo chamber recording for yourself.” The label in question is their venture in tandem with fellow Kiwi Jon Sable, In Dust We Trust, which has so far yielded a sterling set of releases between the trio.

Born 1985 in Stockholm to Hungarian parents, Kornél Kovács' perambulations in music began early and have continued at pace ever since. Raised on that classic, enviable diet of “proper” music training plus parents with killer music taste, Kovács' daytime lessons were given texture at night as everything from Kraftwerk and Art Of Noise to King Tubby and Boogie Down Productions wafted through the house.

Applying the Stakhanovite work ethic of his heritage to all he had learned so far, Kovács started knocking on as many of Stockholm's musical doors as possible, teaboying in the city's finest record stores, stalking its best DJs, working his way through the local library's excellent selection of dance music records. Kovács, then a “clumsy nerd who got to hang around the older cool kids because they found me funny”, even managed to wangle a few DJ gigs on the back of an intense early teenage love of mid-90s drum'n'bass, turning him into “Stockholm's youngest former jungle DJ” by the age of 14.

After a few years in this exquisitely premature retirement, Kovács picked his headphones up again in the mid-00s, and exciting things followed. Kovács had always written about music, and this, which he did for his own mp3 blog and various culture and music magazines, was joined by a DJ residency at Stockholm's legendary Paradise night, as well as a weekly radio show on P3, Sweden's Radio 1 equivalent. An unsurprisingly important stint at Red Bull Music Academy in 2008 was followed by the formation of Studio Barnhus with his best friends Axel Boman and Petter Nordkvist. At first a studio space and DJ trio, and a year later a record label, Studio Barnhus has now charted 50 releases and counting – the initial Good Children Make Bad Grown Ups EP was Kovács' first appearance on vinyl.

The collective's successes have drawn reams of prestigious press coverage in the years since and worldwide DJ dates for its three members, as well as giving Kovács the artistic space that eventually fostered 2014's Szikra, the track Kovács admits was what made him realise he could “actually make music that people appreciate”. Given all this, it would be wrong to describe last year's Pantalón, on Glasgow's Numbers imprint, as any kind of “breakout” moment. Its irresistible, snapping drums and Spanish-language vocal did get people talking and dancing though, while an appearance on Hamburg's esteemed Smallville imprint in the same year saw him connect with another of Europe's electronic music powerhouses.

Kovács' debut album, The Bells, is out on Studio Barnhus in August and was recorded during an intensive two-week session in Gothenburg with his great friend (and great studio engineer) Matt Karmil. Giving your debut LP the same name as the most influential techno track in history certainly takes balls. But after hearing how the album draws together Kovács' natural festive musicality and his long-standing love of club rhythmics, and then factoring in the juggernaut trajectory that's taken him from tea-making record store jester to globally acclaimed producer and DJ, you can certainly forgive his confidence.