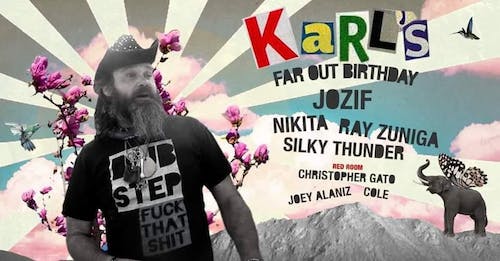 Come have a fabulous time with Karl Heinz Konrad for his 50th!

They say in 2020 Heinz sight is 50/50! That’s right our favorite up all night and day raver is turning 50 and we are throwing him a party at the Great Northern.

After breaking through with ­ what are still standout releases on labels like Wolf + Lamb, Mobilee & Ministry of Sound back in 2010, alongside an RA podcast that comprised solely of re­writes, edits and productions ­ The last 6 years we have seen Londoner jozif cement himself as a unique musical voice in the world of electronic music.

Far from just programming beats that make you jack, his music is some of the most beautiful you will hear, with lush string arrangements, emotive pianos and golden synths coming together into soundscapes that will melt your heart as well as warm your soul. Building on the early success of releases like the Sunrise EP on InFiné, the first releases on Fist or Finger (the label he co­runs with fabric’s Craig Richards) and the summer anthem that was ‘Twilight’ with vocalist Terri Walker on More Music, jozif was unsurprisingly snapped up by LA’s suitably sultry Culprit records for a brace of EPs. Here he further refined his richly musical style with genre defying with releases like ‘Standard Rising’, the ‘Lady B’ EP and now the two­part Waikiki anthem.

Since then he has been enlisted by the cultured likes of Mobilee, Suol and Compost for remixes, and the way he carefully permeates his music with such serene and slo­-mo ambiance yet imbues each track with a cheeky dance floor bump has seen everyone from Sasha to Giles Peterson, Andrew Weatherall to Damian Lazarus fall in love.

Having been a DJ since as far back as 1996, it made sense that the legendary Balance series came calling for jozif when they wanted to kick­off a new mix series in early 2013. What he turned in was a stunningly emotional and heartfelt mix that proved just how sensitive and soothing electronic music can be, at the same time, of course, as subtly making you move your body. For proof of his artistic ability in the booth, you only need ask anyone who has seen him play at places like Space Ibiza, Verboten New York & London’s foremost fabric and many other festivals around Asia and both Americas.

Currently putting the final touches to his debut artist album and accompanying Live show, whilst simultaneously Co­writing the Kerb Staller debut album & Live show alongside cohort and production partner Matt Tolfrey, 2016 is shaping up to be a ‘Live’ one. Coupled with releases on Music for Freaks, Exploited and the resurgence of Fist or Finger, as well his continued world wide residencies at Bedrock & Desert Hearts – jozif shows no signs of slowing down.

Label owner, producer, record selector, and gentleman of the LIVING night. A Dj who refuses to be restricted by genre, Zuniga’s music brings you the full spectrum. His

sets range from the finest house and techno, to electronica and disco. The result is heard in the artist’s stylistically diverse and consistent DJ sets.

Co-owner of internationally acclaimed, Touch of Class Records, and one half of duo Signal Flow, Ray has had the opportunity to establish a strong and growing global network Earning enthusiastic support from international media including Resident Advisor, Mixmag, Thump, Dj Mag, XLR8R, Pulse Radio, plus more.

Today, Zuniga and music partner, NIKITA (listed, PLAY) produce an international music experience called LIVING.us. Their events started as an underground in Brooklyn, and they’ve taken the brand to San Francisco, Los Angeles, Austin, and Europe for Amsterdam Dance Event for the past two years. In 2018, WeArePulse declared LIVING as one of the best events of the week!

As Zuniga’s reputation continues to garner attention for the maturity of his sound coupled with an uncanny ability to create instantly accessible dancefloor vibes, he occupies a unique position in the musical ecosystem. Independent of any hip or hyped musical movements. With releases on Nervous Records, Leftroom, Culprit, Wolf + Lamb, Serkal, and his own Touch of Class, he is now working diligently in the studio on his solo and LIVING project, while also co-operating the Touch of Class Records label. An imprint dedicated to presenting timeless music appreciated by any connoisseur of sound.

On the same day Dolly Parton, Janis Joplin, Edgar Allan Poe, his mother and grandmother were born, so too did San Francisco DJ, NIKITA, begin his enchanted existence. As a young boy in Denver, Colorado, NIKITA's childhood was similar to that of other extraordinary creative youth; days filled with church and show choir, playing the piano, and dancing to his mother's R&B albums. From an early age, NIKITA always knew he wanted to be an entertainer. Then, in 1993, a chance encounter with house music at an underground warehouse party would prove to be a pivotal moment in his life, ultimately guiding NIKITA towards the charmed life he lives today.

It wasn't until the turn of the millennium though that NIKITA would leave his home in Colorado to search the clubs and warehouses of San Francisco for his destiny. At the very least, he would get a degree in Music Business from San Francisco State University. But with a resounding perseverance and an inimitable personality, NIKITA quickly earned his place among the upper echelon of DJs in San Francisco's world-renowned club scene. In 2005, NIKITA was chosen to host his own radio show, The Massive Mix, on Northern California's only electronic dance music radio station, Energy 92.7 FM. Indeed, it was NIKITA's penchant for blending raw grooves with sophisticated sounds that garnered him a residency at San Francisco's legendary nightclub, The EndUp. Today NIKITA credits SF as the city that made him the adult and artist that he is today...

NIKITA is a DJ's DJ, a rare soul who truly understands his role in the DJ booth. Performing anywhere from two to eighteen hour sets, NIKITA weaves music into fantastic journeys of rhythm and sound. NIKITA's ability to contrast the harder elements of techno with the soulful sensuality of deep house has garnered him accolades from some of the world's best DJs and allowed him the rare opportunity to tag team alongside the likes of Cassy, Danny Howells, Lee Burridge, and Derek Plaslaiko. Indeed, NIKITA has played with a Who's Who of international talent, including Danny Tenaglia, M.A.N.D.Y., Joel Mull, Adam Beyer, Craig Richards, Steve Bug, Damian Lazurus, Steve Lawler, and many, many more. With additional inspiration coming from friends such as Ms. Honey Dijon, Tedd Patterson and Danny Tenaglia, it comes as no wonder why NIKITA's story is one of a dream come true.

Today, NIKITA and music partner, RAY ZUNIGA (Co-founder and label owner of ​Touch of Class Records​), produce an international music experience called LIVING.us. Their events started as an underground in Brooklyn, and they’ve taken the brand to San Francisco, Los Angeles, Austin, and Europe for Amsterdam Dance Event for the past two years. In 2018, WeArePulse declared LIVING as one of the best events of the week!

Cole Odin Berggren IS music. When not singing, programming, and drumming for his electronic rock band, Ownership, he can be found DJing some of the best clubs in SF and beyond. Known for sets that feature a wide variety of styles, programmed with a musician's ear, and showcasing DJ skills honed over 20 years, Cole has played such bay area clubs as Housepitality, Ruby Sky, Mezzanine, the Virgin Hotel, Phonobar, Great Northern, Public Works, the SF Eagle and Monarch, where he currently holds a monthly residency on 1st Saturdays. He's played legendary clubs and parties like LIT and APT in NYC, and in LA he's played such notable gigs as the DO OVER, and the rooftop of the Standard Hotel. He's been booked several times to play the Sunset Campout Music Festival, arguably California's coolest music festival. Some of his corporate clients include Tesla Motors, Levi's, Puma, Stanford University, and LIVE NATION! which has him in rotation as the VIP room DJ at The Masonic, and in the poster room at The Fillmore. He also played the opening night party in Super Bowl 50's Super City, with a classic rock set opening for Chris Isaak in front of 6,000 people. His extensive musical background has led to other employment such as session drummer and vocalist, blog-writer for Monster Headphones, Om Records and Stunner of the Month, and music director/head music writer for SEX+DESIGN magazine, where he put his musical knowledge to work planning and DJing huge events, and interviewing artists such as Billy Corgan of Smashing Pumpkins, Cody Chesnutt, Public Enemy, Pillow Talk, Matthew Dear and many more. By day, he also works as the outreach director for Blue Bear School of Music (the longest running non-profit rock n roll music school in the nation), where he runs after-school programs for kids, organizes their events, and created their DJ and Electronic Music Program.