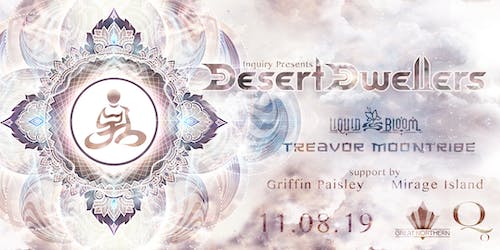 Inquiry is proud to present Desert Dwellers, Liquid Bloom, & Treavor Moontribe at the Great Northern for the San Francisco stop on their 2019 Fall Tour.

The twisting world sounds of this mystical music has guided the Inquiry Family and countless others through coastal car rides, sandy renegade nights, and meditative journeys — we are honored to host such talent in our home town for a psychedelic night of grooves.

While Desert Dwellers have been a staple in electronic music for 20 years, their latest album “Breath” reached #1 on Beatport and #9 on Billboard's dance music chart.

With support from Inquiry’s own Griffin Paisley & Mirage Island, this will be a rare night in which the club becomes a gateway into the beauty of the desert.

Desert Dwellers is the convergence of music producers Amani Friend and Treavor Moontribe, who honed their individual skills in the mystical deserts of New Mexico and California, long before electronic music reached the mainstream. Amani and Treavor combine the raw sounds of the natural world, wrapped in dance-floor and chill-out productions; blending deep bass, earthy percussion, etheric voices, and cross-cultural instrumentation into a sonic incense for the mind and body. Desert Dwellers’ unique global sounds are a bridge between worlds, and their label Desert Trax has become a platform to spotlight similar alchemical artists.

Brought together in the late ‘90s through the legendary Moontribe gatherings, in 2019 the duo celebrated their 20th anniversary of making music together, adding depth to their reputation as a pioneering and prolific downtempo, psybass, and tribal house act from the United States. The culmination of two decades of partnership has forged their Beatport #1 selling electronica album BREATH, out on Black Swan Sounds, which features more than 20 musicians and vocalists over a 10-track journey.

Desert Dwellers’ studio output is matched only by their extensive touring history, which juxtaposes performances at America’s most iconic venues like Red Rocks, festivals like Symbiosis, Lightning in a Bottle, Burning Man, and Coachella, with high-powered sets at the biggest trance festivals around the world; BOOM in Portugal and Rainbow Serpent in Australia. Desert Dwellers are equally at home in clubs as they are in yoga studios, and the jungles, deserts, and mountains of far-flung international festivals.

The music of Liquid Bloom is equally at home on the international festival dance circuit, in the yoga and ecstatic dance studio, and in the more calm sonic spaces reserved for intentional ceremonies. As one half of Desert Dwellers and founder of Liquid Bloom, AMANI brings his dance floor guidance and experience to harness a deep, transportive journey, giving as much weight to calm and the serene as to the ecstatic groove. Joining Amani live on stage and in the studio is one-man looping orchestra Poranguí, whose own globe-trotting journey has made his musical upbringing as varied as the instruments he lays before him. A Live Liquid Bloom performance with the Brazilian-born, U.S.-based artist sees him bounce between didgeridoo, kalimba, and vocals with ease, as he masterfully weaves ancestral songs & indigenous rhythms from around the world to move the body and lift the Spirit.

Treavor Moontribe is one half of electronic music act Desert Dwellers and co-founder of Los Angeles' legendary Moontribe Collective. Other projects include PheuZen and Forever & Ever, each with their own style showing the diversity that has always been a trademark of his sound. That diversity has given Treavor the chance to travel the world playing different types of events and venues ranging from The Great Pyramids in Egypt to Tel Aviv's top nightclub and the beautiful beaches of Brazil to name a few.