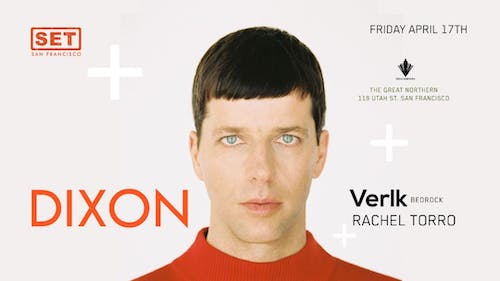 SET with DIXON (Innervisions) at The Great Northern

GET YOUR TICKETS TODAY:

This show will sell out

ABOUT DIXON: When Dixon entered the Berlin club circuit in the early 90’s, he established his name on the strength of DJing. Back then, confidence or experience based on putting out mixes in the internet did not matter as much as it does now. You had to do your practice, of course, but when your thing was good and tight enough to take it to the clubs, there were opportunities to do so. But those opportunities meant responsibilities. A residency did not mean playing the same club every once in a while, it meant playing the same club every week. The crowd did not consist of people that wander in and out of club nights and its guest DJs as the weekly hype commanded them, it consisted of people which headed straight to a certain club night because they were sure its resident DJ would deliver the goods this week as he did last week, and the next weeks to come. As long as that happened, there was no need to move on.

In such a context, there is no way to learn quicker how to become a very good DJ than by making people dance throughout a set that lasts the whole night, on a very regular basis. If you can’t hold the crowd for hours then, you fall through. It is learning by doing, the hard way. Dixon did not only learn very quickly, he loved every moment of it. Starting out low, slow, unfolding the flow, working towards a peak, then working towards another, turning up, turning down, to find the exact point from which to swing moods, to find the perfect way to end what should be a lasting experience. Once you passed your exams in the night club school of that era with distinction, you can rely on it forevermore, and Dixon surely did. His residencies then and now are obviously schooled on the stylistic and technical versatility and skills, attitude, stamina and experience based on countless nights honing ways to direct a loyal crowd on the dance floor at will.

Keeping all this in mind, it comes as no surprise that Dixon extended his merits beyond the club by a medium closely connected to the DJ craft. He compiled and mixed the off limits compilations, which became very popular and introduced his impeccable style of mixing to a public reception way beyond that of those who had already heard him play in a club context. Later he branched out to even more success by doing a highly influential mix compilation for the get physical label’s body language series, a mix cd that has inspired people all over the world. These releases were intended to show the sincere dedication Dixon has to his profession, and they evidentially do.

However decided Dixon was to follow the path of his choice throughout his career, he certainly was not insistent on traveling alone. He used events to introduce foreign DJs to Berlin crowds, raised his profile by providing memorable support slots in the process, and contacts were made. He got to know likeminded souls from all over the globe, and he travelled abroad himself, and his reputation grew further. Meanwhile back home, he made bonds with Jazzanova and became involved with their vibrant Sonar Kollektiv label. Never the one to shy away from challenge, Dixon made his first foray into label and A&R work with running Sonar Kollektiv’s sublabel Recreation Recordings, where he set up a testing ground for his personal view on house. He introduced Âme in the process, two comrades from the traditionally strong deep house scene of southern Germany, whom he brought to the Sonar Kollektiv stable, only to observe that they pulled in the kudos for their music very quickly.

In 2005, the reign of minimal sounds in Clubland was gaining momentum as much as house lost it, and more sooner than later Dixon came to the conclusion that there had to be a way to maintain his preferred sound while so many DJs and artists were reducing the musical ingredients of their output. The choice was simply either to adapt or to rebuild. Dixon decided for the latter and took the next step with another Sonar Kollektiv sublabel called Innervisions, which he founded with Âme. It was clear from the beginning that this label was intended to make a difference, and it was clear from the beginning that all the connections Dixon made with likeminded souls should come into fruition with it. It was a platform that was thought of to keep up the house tradition all those involved stayed so faithful to over the years, but it was also thought of to breathe some fresh air into it. And so it did. Dixon’s famous rework of Tokyo Black Star’s Blade Dancer knocked on the door, and already the second release, Âme’s future classic Rej EP, was breaking right through it. The following releases by befriended artists confirmed the almost instantly good reputation of the imprint and within a short time it became obvious that something was achieved that not any label could achieve: a sound was innovated and an identity, which began to seep through the scene, affecting the way other labels recruited and published their roster. While being developed on the back of a longstanding tradition, Innervisions kicked house back into focus, and many others were happy to join in, either again or for the first time. Always interested in producing some added value to a good thing, Dixon soon used the success to put other ideas into action. The label was parted from the Sonar Kollektiv mothership and became independent, and the trademark artwork of the label was getting connected with sought after fashion and design items, carefully conceived to meet the high standards of the Innervisions camp and its supporters.