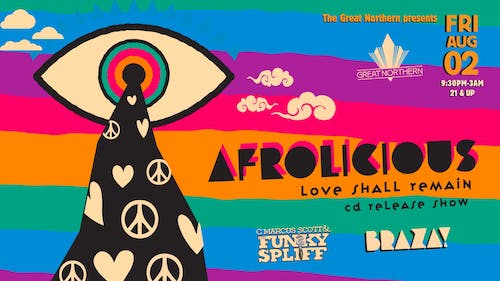 Having just hosted its final party at San Francisco’s Elbo Room in June after a seven-year weekly residency, the wild dance band and soundsytem Afrolicious has broken out with a new album, “California Dreaming Remixed.” In the midst of its 2014 summer tour that has taken it from the High Sierra Music Festival to clubs and festivals across California and Colorado, New York and DC and back the band has stayed steady and wowed audiences along the way.

Afrolicious has established itself as one of the top live/electronic bands on the scene. Launched as a weekly dance party featuring DJs and brothers Pleasuremaker and Señor Oz alongside percussionists, MCs, and horn players, over the years the band has evolved as founding DJ/producer Pleasuremaker (Joe McGuire) alongside his brother Señor Oz (Oz McGuire) hooked up with some of the most exciting personalities in the Bay Area music scene and started writing original music under the alias Afrolicious. By 2010 the live band version of the music had also adopted that moniker. The 8-to-12 member ensemble mixes its live sound with club-heavy beats and textures. The new CD features some of its best-known original songs remixed by Jamaican dub producer Scientist and Rob Garza of Thievery Corporation, among others.

On August 2nd, Afrolicious is teaming up with their Brazilian family, BRAZA! - a decade old production team that has thrown the most memorable Brazilian parties in the US - at Bay Area's awarded venue, The Great Northern. Together they will present a multi-faceted party featuring an exclusive SF performance of the Afrolicious live band, DJ sets by BRAZA! and Afrolicious Soundsystem, plus a fabulous and soulful new band on the scene, C.Marcus Scott and the Funky Spliff. This will be the official night to celebrate the new album by Afrolicious, the community of musicians, dancers, DJ’s and long term family, as they always throw down: inna fine style!